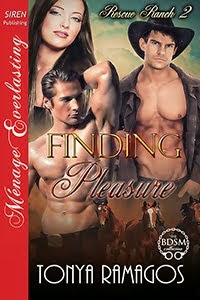 
There’s little Zoey Jamison enjoys more than cooking, but lately, her meals have become as sour as her personal life. Looking to spice things up, she leaves everything behind and hits the road for parts unknown. When she finds herself on Rescue Ranch, sexy cowboys Trent Dickson and Bobby Wiggins awaken wicked hungers she’s never known. But what they expect in exchange for their touch might be too much.
As former Navy officers and men who grew up on Rescue Ranch, Trent and Bobby love to eat a good meal and aren’t afraid of hard work. When Zoey shows up on the ranch, they know the beautifully sophisticated, if a bit frazzled, chef is for them. Convincing her to let her hair down is easy enough, but getting her to realize she’s the submissive they’ve been looking for is an uphill battle they’re more than willing to fight from the kitchen to the bedroom and straight into her heart. 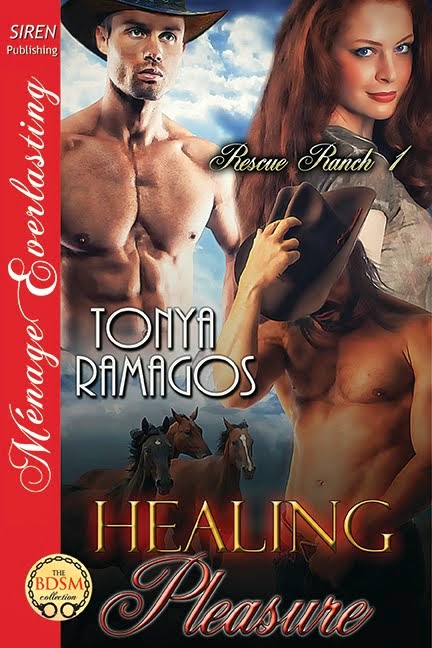 From The Romance Reviews


"For hot as Hades MFM menages, look no further than the incredible Tonya Ramagos. She delivers once again in HEALING PLEASURE. HEALING PLEASURE is the first book in the new series Rescue Ranch by the amazing Ms. Ramagos. All of her books are incredibly awesome, and this one is no exception! Ms. Ramagos knows her way around a crazy sexy menage scene, and I never get tired of her erotic writing. Lena's chemistry, particularly with Brit, was simply excellent, and the way they had an instantaneous bond really made me connect with them. Lena's connection with Trey was slightly less combustible, but still totally yummy."

This title is offered at a 15% discount. Offer ends midnight CST, August 1st.

Ryder and Blaine have been hurt before. Ryder has steered clear of women while Blaine has played solo. When a sizzling sex kitten like Leslie requests some two-on-one time at the firehouse to research her next book, Blaine is eager to start her fire education. Ryder cautiously agrees, too. But when that education lands them in bed, they learn more than their hearts may be ready for.

Lesley’s heart kicked into double-time as his hands moved back to the waistband of his pants and he pushed them, along with what looked like a pair of black briefs, down his powerful legs. He shifted his weight from foot to foot as he pulled off his boots and kicked the jeans and briefs from his feet before he straightened and stood tall and confidently in front of her.
“Now you can see everything.”
The combination of his hoarse voice and the sight of him completely naked sent every thought in her head scrambling. The only thing she could manage to say was, “Wow,” as she let her gaze follow that happy trail she’d been admiring until it met with the thick patch of pubic hair on his groin. His cock was huge and hard and standing between them like a come-get-me exclamation point. She started to reach for it to do just that when his long fingers closed around her tiny wrist.
“Uh-uh, sugar. You touch my dick right now and I’m liable to embarrass myself. It’s been a long time since I’ve had sex.”
Since Marsha had left him. Yes, she remembered. She lowered her hand to her side, anticipation making her shiver as he reached for her again. He didn’t waste a second in getting her shorts and panties off. She helped by kicking off her shoes. Then they stood there face-to-face, both of them naked and breathing hard.
A little less confident about her own body than he was about his, Lesley felt her cheeks heat.
He must have noticed because he lifted a hand to her cheek, the first sign of real amusement she’d seen in him dancing with the heat in his eyes. “Why are you blushing?”
“Because you’re looking at me that way again.” It was more disconcerting and arousing than it had been the other times he’d looked at her this way, though. The amusement hadn’t been there before. The heat had been, but it was headier now, more overwhelming and consuming. It was thickening the air between them, making it harder to breathe, and turning the fire he’d already ignited with his touch to an inferno of blazing need.
“You mean the fireman’s carry thing you said before?” He shook his head as he pulled her against him. “We’re not going to make it to a bed this time. Right here will have to do.”
Lesley had absolutely no argument for that. Especially when his lips touched hers again, his tongue laying claim to hers as his hands roamed her naked flesh. One hand dropped to mold the cheek of her ass while the other pushed between their lower bodies, turning to cover her snatch.
Lesley moaned into his mouth, taking the hint to spread her legs wider when he inched his large hand between them. A single wide finger pushed between her sodden folds, the pad grazing over her engorged clit before flattening over her flaming entrance. She wiggled her hips, giving him a silent hint that she wanted that finger inside her, and heard him chuckle even as he continued to make love to her mouth with his tongue.
He blessedly gave her what she wanted, his hand on her ass gripping her cheek more firmly as he eased the long, thick digit inside her aching pussy. The dense muscles of his bicep flexed under her hand as he pumped the finger slowly in and out of her drenched hole. She rocked her hips, meeting his finger thrust for thrust, and feeling the pressure build in her womb. The heel of his hand flattened on her clit and rotated as he added a second finger side-by-side to the one in her pussy and drove her straight to near madness.
“Come for me,” he growled as he licked his way out of her mouth to nip her jaw. “Let me feel you come apart in my arms, Lesley.”
She couldn’t have denied his request if she’d tried. His fingers picked up tempo, the heel of his hand matching the rhythm, working her pussy and clit until the orgasm building inside her grew claws. Her pussy lips contracted, sucking his fingers deeper as the release took over every muscle in her body. She came, loud moans and unintelligible words escaping her lips as the pleasure spilled from her, coating his fingers and leaving her trembling in his embrace.
Her breath ragged and mind lost in an erotic world of his creation, she slowly opened eyes she hadn’t realized she’d closed to find him staring down at her. He held her gaze as he eased his fingers from her pussy and brought them to his mouth to clean her juices from them with his lips and tongue.
“Damn, you taste delicious.” His voice was hoarser and rustier than ever and his arousal had caused the gray to overtake the green in his eyes. “I’ll want more of that sometime, but right now, I need to be inside you.”
Posted by Unknown at 9:18 AM No comments: 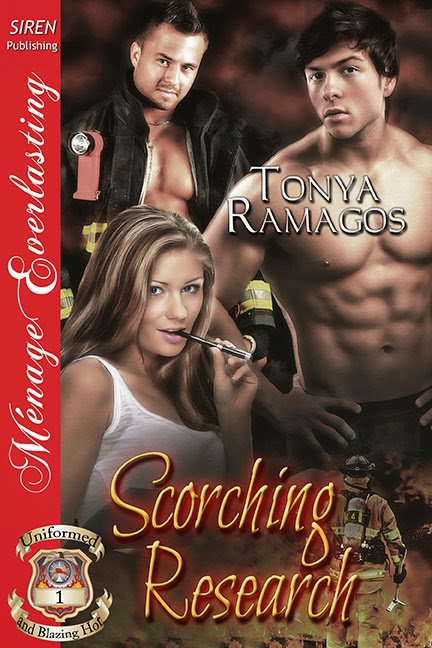 PRE-ORDER!
AVAILABLE: Friday, July 25th
This title is offered at a 15% discount. Offer ends midnight CST, August 1st.
Struggling erotic author Leslie Davenport is looking for the plotline that will send her career soaring. At the urging of a friend, she moves to Cherish, a city bursting with ménage relationships. Leslie sees a bestseller in the making, but she’ll need a couple of willing research subjects to make her book a hit. When hunky firefighters Ryder Cox and Blaine Ellis save her cats from a burning building, she knows they’re the men for the job. But when business and pleasure mix, she wonders if a happily ever after ending is possible.
Ryder and Blaine have been hurt before. Ryder has steered clear of women while Blaine has played solo. When a sizzling sex kitten like Leslie requests some two-on-one time at the firehouse to research her next book, Blaine is eager to start her fire education. Ryder cautiously agrees, too. But when that education lands them in bed, they learn more than their hearts may be ready for.

Get the Siren-BookStrand App for your iPod or iPhone and download 10 new, FREE ebooks, plus 12 other FREE books from last year! Enjoy Building Pleasure [Rescue Ranch: The Beginning] as one of these downloads and see how Rescue Ranch got started. 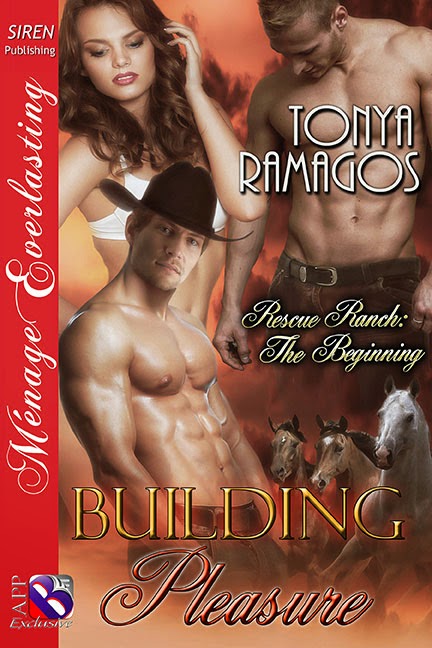 
Have you heard? I have a new firefighter series coming out at Siren-BookStrand starting July 25th. Uniformed and Blazing Hot will be exactly that...full of uniforms and blazing hot! Here's the cover for the 1st book, Scorching Research...

Yep, I'm totally in love!!! This book features Rescue Squad 16's Lieutenant Ryder Cox and squad firefighter Blaine Ellis. Here's the pics I used for inspiration when I was writing the book. I think the cover artist nailed Ryder pretty good. Blaine...not even close, but cover guy will do... ;) 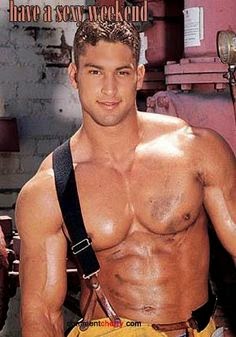 Firefighter Blaine Ellis
Posted by Unknown at 1:41 PM No comments: