Under Their Covers (MFM)
Uniformed and Smoking Hot 1

Lieutenant Rhett Cox is known throughout the CFD as a playboy. A man not looking to settle down, he’s used to handling everything from fires to women with a calm, cool arrogance, but one encounter with Sydney has his internal temperature rising.

Firefighter Carter Devereaux never got over Sydney. Now’s she’s back and he wants her again. So does Rhett. Even in a city known for ménage relationships, neither are into sharing. Then a fire breaks out, Sydney is given too much time to think, and the men have to learn to compromise or lose the woman they love forever.

“Devereaux, keep her worked up,” Rhett told him. “I’ll be back in a minute.”
Startled, Sydney shot a look over her shoulder in time to see Rhett disappearing into the master bathroom. She saw the door close, heard the water come on in the sink, and the forgot all about wondering what Rhett was doing when Carter lifted his head in front of her and licked one beaded nipple into his mouth. Her head rolled on her shoulders, her eyes closing as sheer erotic bliss traveled a flaming path straight to her clit, pussy, and ass. She sucked a breath through clenched teeth when his closed around that nipple, bit, and sent darts of pleasured-pain shooting down that same path. He worked the other nipple the same way, then alternated the attention until both were throbbing with a dark erotic pain that had her whimpering, panting, and on the verge of begging. Behind her, she heard the bathroom door open, felt the mattress dip, and shivered when Rhett’s large hands gently came to rest on her shoulders.
The minty scent of toothpaste drifted to her when he spoke. “Are you still on the edge for me, baby?” His low, melodic voice was huskier with his own needs as he dragged his callused palms down her back.
Sydney writhed, her body bucking against Carter’s hold on her waist, trying desperately to lower onto his cock. “Please. God, you’re killing me.”
Rhett chuckled as his hands turned to glide over her ass. “Can you lean forward for me?”
Sydney flattened her good hand on the front of Carter’s shoulder as Carter’s hands adjusted their hold on her to keep her steady.
“That’s it, Syd. Lift your sexy ass so Rhett can pleasure it.”
She opened her eyes and stared into Carter’s, heard the soft snap as Rhett popped open the cap on the lube Carter had given him, and shivered when the cool gel met with the flaming flesh of her ass.
“You’re going to tell us how it feels.” The calm authority in Carter’s voice left no room for argument. “We want to know how much you like having that sexy ass of yours fucked.”
She did like it. She knew that. At least, she’d enjoyed it when Carter had taken her there. He’d started off surprisingly gentle, a contrast to the way he usually made love to her. That gentleness hadn’t lasted long. He’d well and truly fucked her ass, making her scream, and causing her pussy to plead for a cock. That had been one of the times she’d allowed herself to fantasize about having Carter and Rhett inside her together.
Rhett worked a well-lubed thick finger into her ass, spreading the cool gel deep, and wiggling the digit to coax her inner muscles to relax.
Her pussy flamed, her hips attempted to push back on that finger in a quest to draw it even deeper. Carter’s hold remained firm.
“Please,” she panted, barely able to breathe around the bittersweet pain exploding through her system. “It feels too good. I want more.”
Rhett gave it to her, though not as much as her body craved. He added a second and then a third finger, twisting and pushing them into her most sensitive entrance until she was crying out, begging, and ready to scream.
“Christ!” Rhett growled as he continued to work her ass to a frenzy of crazed need. “You’ve never made those sounds for me before.”
“You…never…teased…me so much…before.” Every word was labored. She had pushed them out of her mouth as her very soul filled with so much ecstasy she was almost certain it might kill her.
“I’m not teasing you now, baby. I’m just getting you ready.”
“I’m ready!” The words gushed from her lips as he pumped his fingers in her ass in a slow rhythm she had come to know so well with him. “Please, Rhett! Carter! My pussy. I need your cock inside me.”
“Ask correctly and I might give it to you.”
Right. She was talking to Carter now. God, she loved their little games, but it was hard to keep things straight when they were scrambling her mind and tormenting her body.
“Please, sir. Will you fuck me now?”
Carter chuckled. “That’s not exactly how I expected you to ask, but it works.”
“Oh, yesss.” It did work. He used his hold on her waist to draw her body down, sheathing his cock into her flaming pussy in a single, vicious thrust that drove him balls deep inside her. He stopped there, his hands still controlling her movement, and she felt tears of sheer frustration burn the backs of her eyes. “Please, sir. I can’t take much more of this.”
“You want Rhett inside you, too, don’t you?”
Unable to speak, she rapidly nodded.
“He needs to hear you say it, Syd.” That calm authority was back in Carter’s voice.
Sydney opened eyes she hadn’t realized she’d closed and managed to find the strength to look over her shoulder and meet Rhett’s gaze. “I want you inside me, Rhett. I’m ready for you now.”
Posted by Unknown at 6:03 AM No comments:

Paramedic Madeline “Maddie” Rafferty has watched quietly as all her coworkers on Station 5’s A-shift have found their true love. Only three people on the shift are still single…Captain Stacy Knox, Truck 29 Lieutenant Casper Wiley, and her. If she can get her way, Stacy and Casper won’t be single for long. Tired of sitting back and waiting for the men she wants to make their move, Maddie is about to show Stacy and Casper that the chemistry between the three of them is too hot to resist.

Fraternizing isn’t forbidden in the firehouse, but when higher ranks are involved, situations get far more complicated. Stacy and Casper want Maddie. Keeping their relationship with her on a purely professional level is sheer torture. And, when Maddie decides she’s had enough of the emotional and sexual distance they’ve put between them, both men are liable to go up in flames. 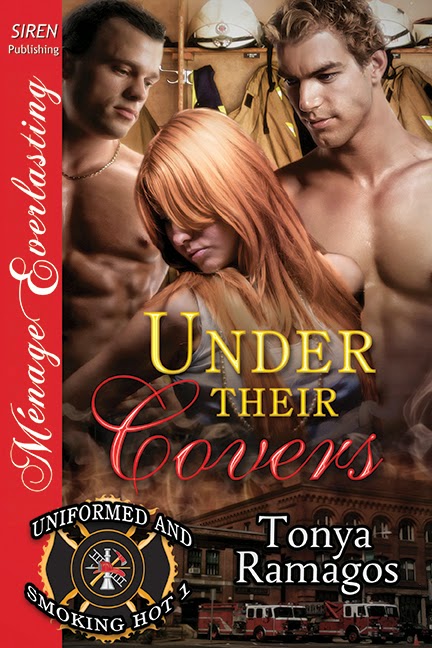 Under Their Covers will kick off the latest mini-series of the Cherish F.D. on May 25!
And watch for book 2, Forever Flames, on June 22nd!