Now available for pre-order: Beneath Their Uniforms 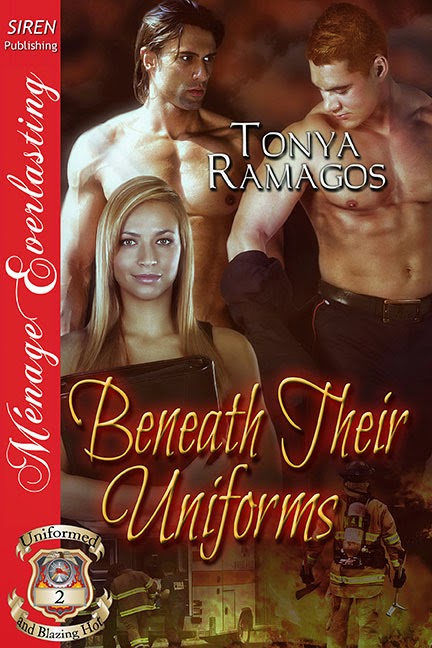 Book 2 of the new Uniformed and Blazing Hot series is now available for pre-order at 10% off the cover price!

Sierra Matthews has sworn off men, especially ones who wear a uniform. Then she has a brush with death and finds herself locked in a scorching kiss with a super-sexy paramedic. But her self-destruction doesn’t end there. Two days later, a devastatingly handsome firefighter makes it his mission to end her self-imposed celibacy. There’s no doubt about it, her hormones are definitely out of whack and, when the men team up, her no-men-in-uniform vow is burned to ashes.
It’s been years since paramedic Neil Ingram has wanted a woman bad enough to pursue and he’s determined not to let Sierra get away. Firefighter Davon Reed knows a hot one when he sees it and Sierra is on fire. When the two discover they’ve fallen for the same woman, things get hotter. But it’s going to take more than their firefighter and paramedic skills to make Sierra see the men beneath their uniforms.

Excerpt:
“So you kissed the paramedic…What did you say his name was again? Neil? You kissed Neil to make Kent jealous?”
“No, I kissed him because…Oh, hell, I don’t know why I did it. It was stupid and spontaneous and I made a fool out of myself and Gabrielle Stevens saw it so now it’s all over the Internet and everyone at school will be talking about it tomorrow.”
“Was he hot?” Cassidy made a raspberry sound with her lips and rushed on before Sierra could answer. “Listen at me asking stupid questions. Of course he was hot. I couldn’t tell much by the picture I saw on Facebook, but…”
Sierra groaned louder. “That little girl better hope I don’t fail her for spite.”
Cassidy giggled. “You can’t do that and you know it. The picture didn’t show much, only the side profile and your lips glued together.”
“Isn’t that enough?”
“He looked hot. I’m not much for redheads, but he seemed to have a good body on him.”
“A body clad in a paramedic uniform,” Sierra reminded her.
Cassidy made a sound of sheer female appreciation. “Honey, that man isn’t wearing any kind of uniform and, if that vow you made prevents you from looking at a fine male specimen like him, we are going to have your head examined.”
Sierra wanted to ignore her friend, but she couldn’t help herself. She opened both eyes, shielding them with a hand to her forehead as she lifted her head off the lounge chair. She didn’t know what direction Cassidy was looking or what man had caught her friend’s eye, but she couldn’t believe it was any other man than the one she spotted stepping out of the pool.
All thoughts and most of her brain function vanished as every cell of her being focused like a laser on the man’s body. Sleek muscles, from the top of his sexy head to his well-shaped feet, bunched and flexed beneath tanned flesh glistening from his recent dip in the pool. Long, powerful-looking legs carried him to a lounge chair a few feet away, where he scooped up a towel, dried his face, and dragged it over his black hair.
“I wonder what kind of date a man like that would take a woman on.”
Sierra knew exactly what kind of date she’d want him to take her on. If she were to start dating again, that was. Which, of course, she was absolutely, positivelynot going to do. Still, for the second time in as many days, she felt all her girly parts come online and scream for attention as the man turned and started toward them. His head turned, his gaze slowly scanning the crowd surrounding the pool as his long strides brought him closer and closer. He wasn’t headed directly toward them, but was more than likely going for the bar at the pool side. Still, his direction afforded her with a full-on view of one supremely gorgeously toned body.
Her heart actually skipped a beat when his gaze sliced over hers, paused on Cassidy, and returned to hers. She swore she saw his step falter slightly and knew she didn’t imagine the way his next strides altered off his previous course, carrying him straight to the foot of their chairs. He stopped between them, a man obviously comfortable in his skin, and treated her to a direct gaze through his milk chocolate eyes.
“Ladies.” His voice was as smooth and sugary sweet as his eyes. “Are you enjoying your time in the sun?”
“We are,” Cassidy answered. “Thanks. You seemed to be enjoying the pool.”
His lips, as absolutely perfect as the rest of him, stretched in a grin. “I was. I needed a quick dip to cool off.”
“You still look hot.”
Oh, God. Please, tell me I didn’t say that out loud.
But she had. She knew it the instant she saw Cassidy’s head whip her direction in her peripheral vision. The intrigued glint in Mr. Hottie’s eyes as he met her gaze again gave her another great big affirmative. Being looked at by him was like being bathed in a deliciously sensual, warm, luxurious, and bone-meltingly wonderful bath of chocolate.
Sierra swore she felt her world shift and struggled to find something to say before she tilted out of her chair. “My friend was wondering what you would think of as the perfect first date.” Still holding his gaze, she saw Cassidy’s eyes narrow as her friend all but gaped at her. “Would it be dinner and dancing or a movie and a walk in the park beneath the stars?”
The intrigued glint in his eyes sharpened as his gaze slid down her front from her face all the way to her toes before doing a slow climb up again.
Sierra fought not to squirm as that leisurely assessment of her body heated every inch of flesh it passed over. “I don’t date,” she rushed to add. “But my friend thinks it would be dinner and dancing.”
His gaze held hers for a meaningful moment before sliding to briefly meet Cassidy’s. “You do, huh?”
“You remind me a lot of my boyfriend.”
It was Sierra’s turn to all but gape at her friend. Cassidy didn’t have a boyfriend. She’d been relieved when Sierra had called her away from her date Friday night. Not because Sierra had been involved in an accident, but because it had given her an excuse to make a quick escape.
“He’s the dinner and dancing type of guy, so I figured you would be, too.” Cassidy hooked a thumb Sierra’s direction. “She’s more the movie and park type.”
His attention locked on her again and one ebony brow winged up. “I thought you didn’t date.”
“I don’t,” Sierra answered a bit too quickly. “She meant when I used to date.”
Posted by Unknown at 7:37 AM