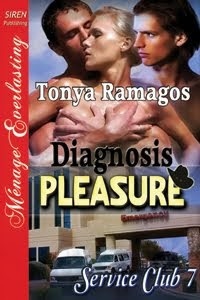 Diagnosis Pleasure [The Service Club 7] is available today at Siren-BookStrand!

Rick and Adam Wilder gave April Ingles one orgasmic night she’s never forgotten. She fled Birmingham with her life in ruins. Now a sheriff’s deputy, she’s rebuilding her career and settling into a new life. She’s there three weeks when she runs into the Wilder brothers. But the Wilders aren’t merely the cowboy doctors of the town. They’re part of an exclusive club, and her association with them, coupled with a secret she uncovers on the job, threatens to ruin her career again.

Rick and Adam made a promise that changed their lives. They stopped sharing women and squashed their dominate needs. They slipped up with April, and that night left them hungry for more. But some promises are meant to be broken. April belongs with them. Lassoing her in will be easy. Convincing her to stay at the possible expense of her career will require a pleasure diagnosis only they can cure.

“Your birthday isn’t until tomorrow.” Eighteen. Jesus, Rick still couldn’t believe it had been five years since their mother had passed away. At thirteen, Emma had been half-grown when he and Adam had taken over raising her. He was still convinced they’d gotten the worst years when it came to parenting.
“And we all agreed we would celebrate it together tonight so I could spend the weekend at the lake with my friends starting tomorrow morning.”
“Yeah, about that. I’m still not crazy about you going off all weekend that way.” Anything could happen when a group of teenagers got together for a weekend at the lake. Rick should know. He’d been a teenager once.
Emma narrowed her eyes. “Crazy about it or not, you said I could go. You’re not backing out on me now.”
“I’m not backing out. I’m just thinking about locking you in your room for another decade.”
That made her smile. “But you won’t and you and I both know it. I’m growing up, Dad,” she said mockingly because she rarely called him or Adam dad. “It’s just something you have to deal with.”
Rick scowled. “That doesn’t mean it’s something I’ve got to like.”
“Welcome to parenthood, or so I’ve heard.” She made a considering face. “It’s not that late, you know? We can hop in the truck and go to a Japanese restaurant if you’ve decided you don’t feel like cooking tonight.”
No, they absolutely could not. The closest Japanese restaurant was in Birmingham. If Rick never stepped foot in that city again, it wouldn’t bother him a damn bit.
It would if you knew you’d run into her the minute you passed into the city limits.
Triple fuck! Would he ever get Elizabeth out of his freaking head?
“Why can’t you be like a normal eighteen year old and want pizza or hamburgers or some shit for your birthday dinner?” Rick grumbled.
“Because I want hibachi chicken and steak with sautéed onions, zucchini, and broccoli.” Emma’s smile stretched far too sweetly. “You promised, remember? And a Wilder never breaks a promise. You taught me that.”
Right now, he was cursing the days he’d done it, too. “All right, I guess I’m headed to the grocery.”
“You might want to grab another six-pack while you’re there,” Adam suggested. “I drank the last beer last night.”
Rick scowled. “I noticed.”
Emma drew her eyebrows together. “Did somebody give you a shot of grumpy at the hospital today? You sure are in a foul mood for a man that’s got the next two days off. Or did you agree to cover another doctor’s shift and spoil your weekend fun?”
What weekend fun?
Rick’s weekends were like every other day of the week. He worked, came home, polished off a couple of beers, and went to bed where he’d lay there until the wee hours of the morning fantasizing and longing for a woman he’d never see again. The only difference the next two days would bring was he didn’t have to go into the hospital.
“He got another ticket on his windshield this afternoon.” Though Adam pretended to whisper the words to Emma, Rick heard them loud and clear.
Emma rolled her eyes. “You parked in the fire lane again, didn’t you? Wow, and I thought I was a slow learner. How many doesn’t that make now, three, huh?”
Rick ignored her and pinned his brother with a steely glare. “Did you call Parker Ferrell?”
Adam nodded. “He said he’d talk to the deputy.”
“Good.” Problem solved. The sheriff would make sure his new deputy learned the ropes of their little town.
“He also said to remind you it’s illegal to park in a fire lane and, if you don’t stop doing it, your truck is liable to get towed next time.”
“Bastard,” Rick said under his breath, which, of course, made his brother and sister chuckle. “I wouldn’t be getting the damn tickets if that new female deputy he hired would leave me the hell alone.”
“So spank her,” Emma said, obviously serious, as if it were the most reasonable explanation in the world.
Rick glared at her and saw Adam pull back to look at her with the same expression of disbelief on his face that Rick figured was on his.
“Go to Adam’s office on Monday, park in the fire lane, and wait for her,” Emma went on before either brother could find the words to respond. “When she shows up to give you a ticket, bend her over the hood of the truck, and turn her butt red. That’ll teach her. She’ll probably get real turned on, too. Then you can take her in Adam’s private office and the two of you can have your way with her. I haven’t seen her myself, but the town grapevine is saying she’s really pretty.” She waited a beat and her gaze danced from Rick to Adam and back again before she asked, “Why isn’t either of you saying anything?”
Rick didn’t know what the hell to say. “Maybe we were waiting to see if you were finished?”
Adam was more honest. “Maybe we can’t believe the things you just said.”
Emma rolled her eyes again, pushed off the doorframe, and walked out of Adam’s embrace into the kitchen. “Please. I’m not dense and I know the two of you aren’t either. You’re the smartest men I know.”
“Here’s hoping she doesn’t know many men,” Rick muttered.
Emma shot him a withering look on her way across the kitchen. “You’re miserable, both of you.” She glanced at them over her shoulder as she pulled a glass from the cabinet. “You’ve been miserable for years and, no matter how much you loved our mother, her dying didn’t do this to you. That stupid promise you made did.”
Rick jerked around to face her, but not before he saw the shock pass through Adam’s expression.


“What promise?” Adam asked dumbly.
Posted by Unknown at 2:09 PM