Prologue from Safe and SEALed with Ecstasy 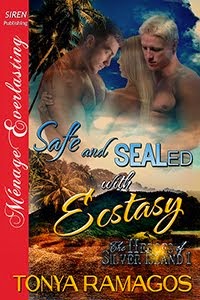 Safe and SEALed with Ecstasy is available now at
Siren-BookStrand!


Lara started to ask what he was talking about, but he fell into a conversation with the other men over his headset. She figured out he must mean Cabelly. What she couldn’t have figured out from what she got of the one-sided conversation was just how much one look at Cabelly would supremely devastate and totally awaken her already raging hormones…especially when he started to sing.
Posted by Unknown at 6:13 AM