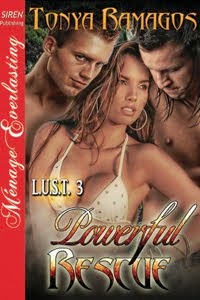 Wow! I'm running way behind on announcing my own release! If you haven't found it yet, Powerful Rescue, book 3 in the L.U.S.T. trilogy, is now available at Siren-BookStrand.

Calista Maverick allowed herself to be were-napped to find out who’s leading a terrorist were-trafficking cell. She refused rescue by Gideon Delacroix and Kahil Lowery once, knowing they might save her life, but they would put her heart in danger. Now they’re back and they won’t leave without her...body, heart, and soul.

Gideon should’ve thrown sexy, stubborn Calista over his shoulder and marched out of Caracas when he had the chance. Instead, he left her. Now he can’t forget her. Worse, his attempt to get her out of his system has landed him in bed with a man he despises and secretly loves.

Kahil knows Gideon would rather eat dirt than admit he wants him. Still, they have one thing in common...their desire for Calista. Kahil intends to go back for her, and he’ll need Gideon’s help. Rescuing her will be easy. Convincing her to surrender her heart while protecting her from the beast out to own her won’t be.