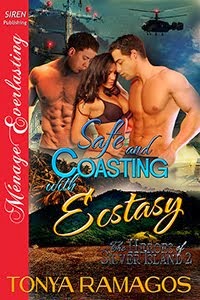 Kimberly Bevel found her place on Silver Island. In a community where ménage relationships are the norm, all she’s missing is the love of two super-sexy hunks to complete her paradise. When she meets Coast Guard Petty Officers Mett and Charlie Doyle, she knows she’s found the men she wants, even if the brothers aren’t eager to share.

Mett and Charlie have been equally attracted to women before, but Kimberly is the first neither have been willing to walk away from. There’s little more important to Mett than a woman’s happiness and he knows exactly how to deliver it. Charlie isn’t as suave as Mett, but he’s got a few moves up his sleeve.

While the brothers go head-to-head in their efforts to win Kimberly’s heart, she looks for a way to keep them both. But when she becomes the target of a madman, she may need Mett and Charlie to do more than keep her bed warm at night.