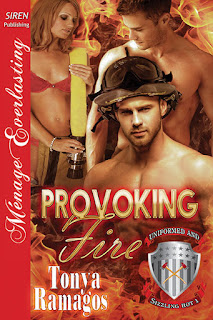 In the wake of a deception that shocked Station 4’s C-shift, put everyone under a microscope, and left Engine Company 2 two firefighters short, Lieutenant Cameron Slovaks and firefighter Korlin Jenkins know they should treat their new coworkers like any of the guys. Except, one of them is a headstrong, whip-smart, irresistible sex-kitten and she has her sights set on them.

Julia Patrick’s life goal was to be a firefighter. Now, she’s fresh from the academy, assigned to Station 4’s C-shift, and convinced her dream is colliding with a nightmare. She may be new to the job, but she knows heat when she feels it. The spark between her, Cameron, and Jenk is strong enough to ignite one amazing fire. But can they be trusted or are they keeping a toxic secret? Determined to find out, she gets closer to them. Then her life is threatened, and she can’t help but wonder if they are who wants her dead.

It tasted as stupendous as the rest of him, hot and thick and long and fantastic. Her pussy convulsed, juices leaking from between the folds, and her clit throbbed. But that wasn’t where she would get his cock. Though Cameron was behind her now, after the way Jenk had played with her ass before, she was certain he would be the one to enter where she’d never allowed any man.
She would allow him. The sheer idea of it as she delved the tip of her tongue into the weeping slit of his cockhead before exploring his full length with her lips sent whips of need slashing across her anus. It didn’t terrify her, she realized, and she knew why. Jenk would go slow, he would be gentle, and he would make sure it felt good to her, all because he loved her.
“Jesus, Julia!” Jenk groaned. “Baby, you’re going to make me come if you keep that up.”
Julia swallowed a smile right along with another inch of his cock, knowing she better enjoy her feast while she could. Cameron proved her right barely a half second after the thought crossed her mind. He fisted his hand in the back of her hair, tugged her to her feet, and pulled her head back.
Then he was kissing her, obviously not caring that she’d just had Jenk’s cock in her mouth. He kissed her until every erogenous zone in her body flamed, until her pussy was dripping wet, and until she was almost positive the needs inside her were going to send her to an early grave.
“Come with me,” he told her, his voice rusty with his own arousal as he ended the kiss and released his hold on her hair. He stretched out in the center of the bed and held his arms out for her. “Ride me, Julia.”
She’d never made love to two men at the same time before, but even seeing Cameron’s amazingly ripped body and already sheathed cock waiting for her didn’t make her forgot about the sexy man she’d been pleasuring a moment ago. She looked at Jenk, cupped his nape, and pulled his mouth down to hers.
“I’ll see you shortly?”
He smiled against her lips. “Just as soon as I get the supplies I need.”
Oh, boy! The sparks he ignited inside her with those words actually made her shiver. He held her gaze for a meaningful moment, then eased from her embrace, and turned to pull open the nightstand drawer behind him.
Her system jittering with a wicked anticipation more intense than anything she’d ever experienced, she climbed onto the bed and went straight into Cameron’s arms. That’s when inspiration struck. She skimmed her hands down to his wrists as she settled her lower body over his lean hips and pinned his arms to the bed. Amusement danced in his eyes and a cocky grin quirked his lips. He could easily overpower her. She wasn’t a wimp by any means, but he was bigger and stronger and could flip her onto her back and assume control any time he wanted. Knowing that made the moment all the more special as she lowered her body to his, taking his fully erect, massive cock inside her pussy in a slow glide that had his grin disappearing as his lips formed a thin line of concentration.
“Holy hell, Julia!” he rasped and then sucked a breath through his teeth as she rocked her hips forward, grinding her clit on the base of his groin.
Julia lifted her hips until she nearly let his cock slip out of her and then lowered her body again, taking his full incredible length inside, and scraping her clit over the coarse hairs at the base of his groin once more.
“Julia.”
Her name was a warning this time, ground through his gritted teeth. She felt the muscles in his wrists flex, but he didn’t push them against her hold.
“Baby, I’m trying to let you have your fun.”
She giggled, albeit breathlessly, and slowly repeated the move again, drawing out not only his torment, but also her own. Her body wanted her to go faster. Every cell inside her was begging for more. She could see by the intense concentration on his face that he meant what he’d said, that he wanted her to go faster, too, but there was no way this man would beg.
Or would he?
“What do you want, Cameron?”
Though he managed a half laugh, it was definitely strained. “Nice try, beautiful.”
She smiled down at him and continued to ride his cock in that same slow rhythm that was driving them both to the brink of insanity. “That wasn’t an answer.”
“Then, what do you want, Julia?”
Jenk’s voice behind her had her body stilling on Cameron’s cock and her belly nearly flip-flopping out of her navel. So much for her not forgetting about her other sexy man. She’d allowed the moment with Cameron to distract her, and Jenk had taken the opportunity to close in and turn her question around on her.
Forgetting herself, Julia sat up straight on Cameron’s cock, realizing the instant his large hands closed on her hips that she’d let go of his wrists. She narrowed her eyes at him. “Damn it.”
His cocky grin was back in full force. “That wasn’t an answer.”
“Ha-ha, funny man.” She turned to look at Jenk over her shoulder and felt her amusement go up in smoke. He was sitting with his legs straddling Cameron’s, a tube of lubrication in his hand, and his dick stretching long and hard to his abdomen. She swallowed hard, glanced at the lube, and met his gaze. “You. I want you, too, Jenk.”
There was nothing boyish in the grin that tilted his lips this time. Oh, no. That grin was full of so much heat it seared her straight to the core. “Bend over Cameron and let me prepare you, baby.”