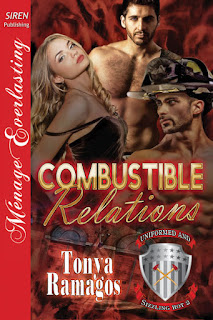 As a PR guru with the fire commissioner’s Media Affair’s Office, Renee Hofstede is determined, no matter the cost, to bring Station 4’s C-shift, and especially Engine Company 2’s crew, back into public favor after they’ve been put through the media ringer. Even if it means going nose-to-ripped-chest with captains Trey Baggett and Mick Bracken. But, when an old nemesis comes to Cherish, anything becomes fodder for flames. Renee is no exception when Trey and Mick become her personal knights in turnout gear.

Trey feels things stir in unspeakable places when Renee sashays into his office and reveals her plan to regain the community’s respect for the shift under his command. Mick is accustomed to following orders, but when they come from a sex-kitten like Renee, he’s not sure what to do. Then danger strikes and Trey and Mick’s protective instincts kick in. But what transpires will be combustible enough to make the three of them explode.

“Renee, sweetheart, I—”
It was her turn to narrow her eyes at him. “Are you really going to tell me no, Mick Bracken?”
That got her a soft chuckle, but his expression immediately turned serious again. “Are you sure?”
“More sure than I’ve ever been of anything in my life.” It was the truth. Well, almost. There were several things she was sure about these days. She was sure of her love for him, of her love for Trey, and of her desire for both her men to make love to her at the same time. It would hurt, being filled by two massive cocks at once. She was certain of it, but she no longer cared.
“Damn, I love you.”
The husky declaration spun through her, heating her system and filling her heart. “Damn, I love you, too.”
He grinned, lifted his head to brush his lips to her mouth, and then gave her ass a soft pat. “Go to Trey while I get some lube out of the bathroom.”
“Come here, baby.” Trey reached her, his hands steady on her sides as she moved to straddle his waist. “In case there’s any doubt in your beautiful mind, I love you, too.”
She hadn’t thought her heart could feel any fuller, but it did. “And, I love you just as much.”
“Should we wait for Mick?”
Renee answered him by flattening her hands on his chest and lowering her body onto his. Her pussy was already drenched. It stayed that way when she was around either of the men she loved. And when she was with both of them…
“Christ,” Trey ground through his teeth as she settled her body on his, taking his cock all the way inside her cunt to the hilt.
Being filled by Trey’s cock was the greatest of pleasures. Her body immediately accepted the intrusion, her inner muscles expanding only to clench around his shaft, increasing the fantastical sensations that ricocheted through her.
“Mick can catch up with he gets back,” she managed to say, albeit breathlessly.
“He better hurry.”
Amused, she chewed her bottom lip as she met Trey’s gaze. “Oh? Why is that?”
“I should be too old for premature ejaculations,” he said gruffly, “but damn if you don’t do that to me every time I get inside you.”
Renee threw her head back and laughed. Then, she stopped laughing as she felt the foot of the bed dip behind her. She looked over her shoulder to find Mick had returned with a tube of lubrication fisted in one hand.
“Do you two need a few more minutes?”
Trey answered before she could. “Not if you intend on coming with us.”
Renee laughed again. “I think he means that in the literal sense.”
Mick grinned, but eyes flamed with a desire that scorched her soul. “Bend over, Trey, sweetheart.”
Trepidation and anticipation mixed a crazy concoction in her system as she followed his instruction and fixed her gaze on Trey. She stiffened when Mick palmed her ass and silently willed herself to relax. She started to shake from her head to her toes, her breaths becoming ragged as eagerness slammed into fear inside her.
Trey laced his fingers in the side of her hair. “It will feel good if you let it.”
Unable to speak, she nodded as Mick’s cool, wet fingers moved between her buttocks. She couldn’t hold Trey’s gaze any longer. Her eyes closed on their own accord and her head bowed. Her mind raced as rapidly as her heart as Mick’s fingers massaged her flesh, spreading the lubricant over her ass. His finger pushed inside her anus, bringing with it a stinging pain that quickly dissolved into a mind-numbing pleasure.
“Talk to us, Renee,” Mick softly urged. “How does it feel?”
She shook her head, unable to describe the bittersweet pain morphing to astronomical bliss. It took the form of searing darts that shot from her ass straight to her pussy that was already filled by Trey’s cock. “More,” she finally managed. “Please, I want more.”
Mick twisted his finger inside her, pulled it free, and another finger joined to work the gel in deeper. Together, his fingers stretched her anus until she pleaded with him to stop, to give her even more, to do something to relieve the talons of confusion clawing through her body.
“Oh, God, Mick, I can’t.” It was too much. The pleasure of it was blinding her, the pain a burning craze that shouldn’t feel good, but somehow did.
Mick’s fingers spread deep inside her, separating to stretch her as they circled and eased back only to pump inside her once more. The burn magnified, her pussy leaking juices around Trey’s cock even as it convulsed around his shaft. The intensity of it drove her to a crazed state of need. Her eyes filled as her clit begged and her hips jerked against Trey’s hold, now firm on her hips. Mick’s fingers began to methodically pump into her rear.
“He’ll stop if you want him to,” Trey told her.
“No!” The cry was wrenched from her throat as Mick pulled his fingers free only to plunge them in again. More coolness added to the inferno he’d built in her ass as he worked another glob of gel into her, the grease making a squishing sound as he fingered her deeper, faster.
“I’ve got two fingers in your tight sexy ass, sweetheart. God, I wish you could see this.”
“Forget seeing it. I can damn near feel it,” Trey said through clenched teeth. “Her pussy is tightening around my dick. Fuck, it’s amazing.”
“Are you ready for my cock now, Renee?” Mick asked as he continued to thrust his fingers inside her ass.
“Yes, please.” She half groaned and half cried out the words. “Make love to my ass, Mick.”
“Mother of God, that sounded so sexy.” He positioned himself, holding her ass cheeks spread with his hands as his cock nudged against her anus.