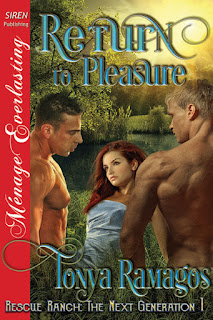 Former Navy SEALs Dillon Stokes and Korbin Blackwell have dedicated their lives to neutralizing terrorism. Now operatives with the ETDF, an elite counter-terrorist force working independently of government protocol, they’re handling the toughest missions in the business. But an assignment is about to drop into their laps that is going to test their skills, hearts, and a fifteen-year friendship.

After three attempts on her life, Temperance Calvert knows someone wants her dead, but the Memphis police don’t believe her. Alone and with nowhere else to turn, the only place she can think to go is Rescue Ranch. But getting close to Dillon and Korbin again will be certain suicide for her heart. Rescue Ranch, a safe haven for wayward boys, has changed since Temperance left Pleasure, Tennessee, but a few things have remained the same. Loyalty, honor, and bravery still run the land, and Dillon and Korbin still hold the key to her soul.