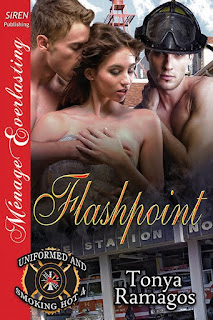 Flashpoint (MFM)
by Tonya RamagosUniformed and Smoking Hot 4Siren-BookStrand, Inc.Heat Rating: SEXTREMEWord Count: 53,592
PRE-ORDER!
AVAILABLE: Monday, September 14th
[Siren Ménage Everlasting: Erotic Ménage a Trois Romance, M/F/M, HEA]
Firefighter Lena Durham is hell-bent on keeping a promise she made sixteen years ago to never date a fireman. Except, two have gotten under her skin…big time! She’s falling for smoking hot firefighters Wes and Axl and the flashpoint that ensues could break that promise and damage her career.
Firefighter Axl Shaffer’s position on Engine 9 may be temporary, but he’s been on Station 2’s B-shift long enough to know what he wants. The tough, sexy, and capable Lena has sworn to never date firemen, but he’s about to show her that some vows are made to be broken.
Wes Stanley has been in love with Lena for years, but he’s kept his feelings a secret. Now, he’s not the only one that wants her. He cooks up a plan and includes Axl, but trickery isn’t his style and he just may have ruined his chance to have the woman he loves and the friendship with her he holds dear.

“Jeez, I’ve played hell catching you alone today.”
Wes Stanley bit back a grin, even as his dick gave an excited jerk behind the zipper of his uniform pants at the sound of Lena Durham’s voice. It was barely above a whisper, but it was enough to send his system rocking with a longing he couldn’t shake no matter how hard he’d tried.
He’d stopped trying. He couldn’t say when things had changed for him when it came to Lena, when he’d started to see the amazingly beautiful woman beneath the tough treat-me-like-one-of-the-guys exterior or when exactly he had fallen for her. He knew only that it had happened, and it was high time to do something about it.
He glanced at her as he closed the door to the tool compartment nestled in the side of Ladder Truck 52. The woman was amazing, always so well put together, and always so on top of everything. Today was no different. Her shoulder-length brown hair was pulled into a perfect ponytail high on the back of her head, her uniform T-shirt and slacks were wrinkle free, and he would’ve sworn she’d spit-shined her boots. Damn if looking at her didn’t make him want to rumple her up.
“I would’ve made it easier if I’d known you were trying.”
Her eyes completely slayed him, especially when he caught those quick flashes of desire that moved through them when they were together before she got control of herself and blinked them away. Things hadn’t just changed for him over the years they’d worked together. They’d changed for her, too. She was damn near a pro at hiding it, but every now and then, she gifted him with just a little something that confirmed his suspicions. She wanted him as badly as he wanted her.
“I need a favor, a very big favor.”
Wes flattened a hand on the side of the rig and leaned on it. “Name it.”
Lena hesitated and slowly scanned the bays again, obviously making sure they were still alone. “I need you to crash a date tomorrow night.”
No way! Was she serious?
“Whose date?”
Lena took a deep, audible breath and let it out slowly. “Mine.”
Because he knew laughing wasn’t the response she would expect and it would ruin a much thought out and very carefully laid out plan, he managed to keep it together and simply blinked at her. “You want me to bust in on a date you have with another guy tomorrow night?”
“Yes. I’m supposed to meet him at seven-thirty at Amigo’s. It’ll look staged if you get there exactly at seven-thirty, so maybe wait about ten, fifteen minutes max before you show up. It would probably be better if you brought someone with you, too.”
Wes lifted a brow. “Who am I supposed to bring?”
She gestured toward the closed door to the common room of the firehouse. “I don’t know. Bring Prescott and Thomas. They love Mexican food. Hell, bring any of the guys. I just need this to look like it always does when we get together off shift and not like a date.”
Wes couldn’t bite back the grin this time. “But you said it is a date.”
“It is, but I don’t want it to look like one.”
“Then why did you agree to go out with the guy?”
“I didn’t. I mean, I did, but I didn’t have choice.”
Wes gave her a puzzled look. “Are you saying this guy is forcing you to go out with him?”
Lena blew a frustrated breath up her face, and damn if Wes didn’t feel his lips spread in another grin. It was happening, just not in the way he’d fantasized about for years. She was getting rumpled. Well, okay, rattled was probably the more appropriate word, but either way, he was loving every second of it.
“He isn’t forcing me. My grandparents are. Well, they’re not exactly forcing me,” she corrected, “but they really want me to go.”
Wes slowly nodded. “And you couldn’t say no.” It didn’t surprise him. There was only one thing in Lena’s life he figured meant more to her than being a firefighter. Correction. Three things. Her grandparents.
“You’ve met my grandparents. Could you say no to them?”
Wes chuckled and shook his head. “I doubt it.”
“Look. The guy is a firefighter. You know how my grandparents always donate money to the orphaned children’s fund during the cops and firefighter auction?”
“They’re some of the fund’s biggest contributors.”
“Right. Well, usually, they write a check and that’s the end of it.”
“But this year, they bought you a date.”
“You really have to help me out here, Stanley. You know I don’t date firefighters.”
Oh, he knew that all too well, but he was really hoping tomorrow night would change that.
“Who’s the firefighter?”
Lena shook her head hard enough to send her ponytail swinging. “I don’t know. The grandparents wouldn’t tell me. I know it’s not anyone on our shift or A-shift out of Station 5. All of those guys are in relationships these days, and none of you were involved in the benefit.”
She sounded so sure of that that Wes wasn’t about to tell her otherwise.
“At least you’ve eliminated twenty-seven guys.”
Lena scoffed. “And still have close to a hundred possibilities, counting the captain and crews left at this station and the other two firehouses. Thanks for reminding me. So, you’ll do it, right?”
The hope in her amazing eyes filled his heart. “Yeah, Durham. I’ll do it.”
And pray like hell you don’t burn me alive after I do.
Posted by Unknown at 5:19 AM